In 2002, in a remote village in Pakistan, 30-year-old Mukhtaran Mai’s life changed forever when the tribal council sanctioned a punishment against her for a crime allegedly committed by her younger brother. Following the custom of honour for honour, Mai was gang-raped and then publicly paraded as an example. Normally the only recourse for such a woman would be suicide. Instead, Mai sought justice and shook Pakistan’s decaying judicial system to the core. The international press and human rights organizations turned her case into a cause célèbre. The Pakistani government eventually paid her reparations, which she invested in a school to give local children the education she never had; even the children of her attackers were enrolled. Mukhtaran’s village, which once had no electricity or roads, now has a women’s crisis center, three schools, a community dairy farm, and a hospital, thanks to Mukhtaran Mai. She was flown around the world to receive awards and speak on women’s rights. In the outstanding documentary Shame: The Story of Mukhtaran Mai, director Mohammed Naqvi presents the astonishing spirit, resilience and self-belief that sustained Mai through her incredible journey. 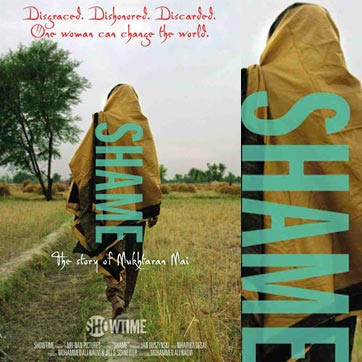