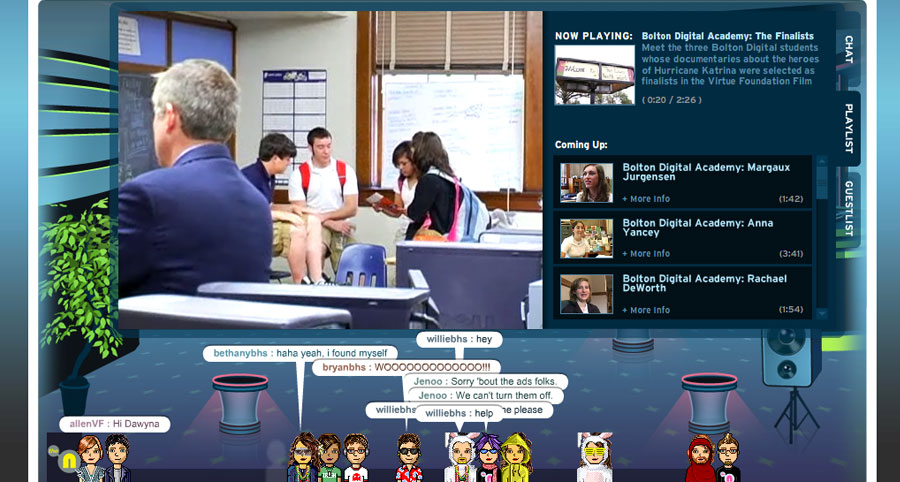 There was no red carpet, but it was a screening party.

Except, this screening party was in the virtual world. All viewers were represented by avatars or virtual characters.

All three finalists are from Bolton High School.

“The line between media consumers and media producers is rapidly blurring, and nowhere is this more evident than with our teen audience,” said Tony Zito, Vice President, The N Digital. “These shorts are not only a great example of the boundless creative energy of teens, but also of their palpable desire to do good in the world. We couldn’t be more proud of these young creators, and are thrilled to showcase their work on The-N.com.”

The contest asked students across the state to film a documentary on the impact of Hurricane Katrina and Rita on their communities and themselves.

Anna interviewed a Rapides Parish school bus driver, who a day after being hired, was sent to New Orleans with more than 170 other drivers to rescue people stranded at the New Orleans Superdome.

Rachael talked to her mom about how the Catholic schools in Alexandria had stepped up to help provide an education to families evacuated to the area.

Margaux interviewed Paula Katz, her neighbor. Katz had relatives live with her for three months.

Katz attended the party Friday. She didn’t know when Margaux came over to ask to interview her for a class project that the interview would go out to millions of people.

“This is so wonderful for her and exciting,” Katz said. “This is just great.”

She said she sees Bolton’s Digital Academy, which is what the school has become this year, as opening so many doors for its students. The Digital Academy gives every student a laptop and is slowly replacing the need for textbooks. It is the only program in the state and one of the few in the nation.

It was the Virtue Foundation’s donation of laptop computers that started the high school as a Digital Academy.

“By providing a platform for the students to share their vision, hopes and dreams using a technology rich format, the Virtue Foundation hopes to highlight the critical need of providing each and every child with a 21st Century education,” said Dr. Joseph Salim, executive director of Virtue Foundation. “The tools they receive are necessary for them to compete in an increasingly competitive global environment.”

Friday’s screening party was done through The-N.com’s Screening Parties application. Students were allowed to create avatars that appeared on the bottom of the screen as the videos were released online for the first time. The students could talk with one another and talk with network and Virtue Foundation officials.

In addition to showcasing the three films, the network’s site also did a showcase on Bolton’s Digital Academy. A film crew had come earlier this month to film interviews and shots of the school.

“I am impressed,” Jones said as he watched the videos.

The retired Brigadier General from the Louisiana National Guard was at the Dome following the hurricane. He said he remembers sleeping in a parking lot and how happy he was to see the miles of school buses coming into the city to help take people out.

Jones said he was proud of the work of all the students and for them to know that their Digital Academy was a model for potential programs across the United States.

Anna said she was shocked to have won first place. She is now very interested in doing more videos but now has to get someone to buy her a video camera.

“I am not a pro yet, but I am getting there,” she said. She said she has the Digital Academy to thank for that. Margaux and Rachael said they were excited and happy with having won second and third place.

“I can’t believe so many people will see our videos,” Margaux said.

Dawayna Sanders, the students’ teachers, said the screening and awards are exciting for her students and motivates all of them to work on the quality of their videos. The school is looking to enter another Virtue Foundation film contest in the future.

The three students will be honored at the May School Board meeting for their videos.