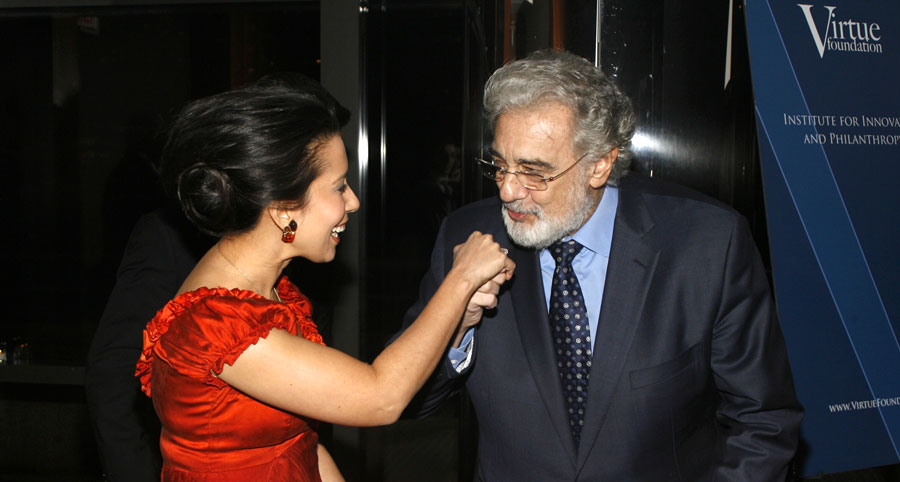 Virtue Foundation hosts evening with Plácido Domingo and Monica Yunus at Lincoln Center and co-hosts 2012 Senior Roundtable on Women and the Judiciary at Fordham Law School in New York, NY

In celebration of International Women’s Day and as a kickoff to the 2012 Senior Roundtable on Women and the Judiciary, Virtue Foundation hosted a cocktail reception and private concert featuring Plácido Domingo, accompanied by renowned opera singer and Co-Founding Director of Sing for Hope Monica Yunus and conductor Alberto Veronesi on piano. The event, held on Wednesday evening, March 7th, gathered special guests and friends of Virtue Foundation to highlight recent program successes and preview the exciting events and projects on the Foundation’s horizon. In particular, Dr. Joan LaRovere discussed recent developments in healthcare, justice and empowerment projects implemented by the Virtue Foundation Institute for Innovation and Philanthropy in Ghana, including the new Get on the Map! Initiative.

Then, on Thursday, March 8th, Virtue Foundation, in partnership with the Avon Global Center for Women and Justice at Cornell Law School, the Leitner Center for International Law and Justice at Fordham Law School, the International Association of Women Judges and Lawyers Without Borders, hosted the 2012 Senior Roundtable on Women and the Judiciary at Fordham Law School in New York, NY. This year’s Roundtable fostered discussions related to sustainable development, rule of law and the impact of women judges, with special emphasis on constitutional frameworks and gender. The Roundtable hosts also partnered with the Women in the World  to invite Roundtable participants to the Women in the World Summit, hosted by Newsweek & The Daily Beast at Lincoln Center in New York, NY from Thursday, March 8th to Saturday, March 10th 2012.

Program highlights included engaging discussions from Supreme Court and High Court Justices from Asia, Africa, Europe and the Americas on constitutional reform and improving gender parity and the advancement of women in judiciaries across the globe. The judges then participated in the Women in the World events, including engaging panels on “Women and Combat,” “Africa’s Women on the Rise,” and “Domestic Slavery at Home and Abroad.”